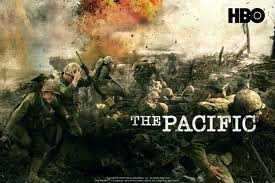 I’m a big fan of war films when they are done right. I love films like Saving Private Ryan, The Thin Red Line, Platoon, and many others. I love the heroism that is often on display in these movies, and I appreciate the drama and intensity that I am able to experience from the safe distance of the movie theater. I think these films resonate with my own natal Mars square Jupiter (aligned with my ascendant), which can be the archetype of the principled (Jupiter) warrior (Mars), and the celebrated war hero/ the honored soldier (someone like John F. Kennedy has a Mars-Jupiter conjunction and it fits his war hero status and his barrel-chested confidence). Mars-Jupiter is an archetype that is drawn to adventure and when I watch these films that part of me is deeply satisfied.

In this past week I have been taking in Tom Hanks and Stephen Spielberg’s powerful miniseries The Pacific on BluRay, and I have been deeply impacted by it. I think it is probably one of the most intense portrayals of the intensity and horror of war that has ever been filmed. It focuses on the stories of three Marines and their experiences in the pacific theater of World War II. We get to know these marines intimately and we are able to see how deeply they are transformed by their experiences on the battlefield. It is very moving. The battle sequences are as intense as the famous sequences in Spielberg’s Saving Private Ryan, but here they are sustained over the full period of a ten hour mini-series.
The war genre in film is most related to the Saturn-Pluto complex, and Richard Tarnas explores this archetype at length in Cosmos and Psyche. The history of major wars regularly coincides with major hard aspect alignments of Saturn to Pluto, and Tarnas gives many examples of this. World War I began under a conjunction, World War II under a square, The Cold War under the next conjunction, The Vietnam War escalates under the next opposition, and more recently 9/11 and the beginning of the War on Terror began under the last Saturn-Pluto opposition. We also regularly see the release of major films about war either under collective Saturn Pluto hard aspects, or they are directed by people born with Saturn-Pluto hard aspects.
Saturn-Pluto can be one of the harshest combinations and it has something to do with the confrontation with the darkest dimensions and potentials of the human psyche. It can be the journey into the “heart of darkness,” and the confrontation with evil. It also seems to deal with such themes as trauma and the journey to overcome trauma. All of these themes are explored in The Pacific, and we see the main characters deeply impacted by their confrontation with the relentless horrors of the battlefield. Saturn-Pluto can be an archetype that is often present when an individual or a collective has a loss of innocence and is forced to face the harshest realities of life, and we see the Marines in this series transform from innocent boys to deadly serious men in the course of a few hours of battle. Saturn-Pluto is also the archetype of “gritty realism,” and often it is behind some of the most brutally realistic portraits of fear and violence, as it is in this miniseries. 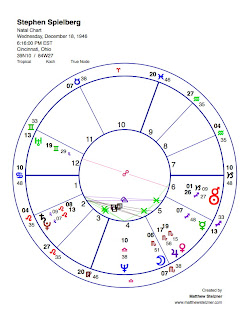 Both Tom Hanks and Stephen Spielberg are born with tight Saturn-Pluto Hard aspects (Spielberg is born with the conjunction in 1946, and Hanks is born under the next square in 1956). They formed a deep bond during the filming of Saving Private Ryan, and then they wanted to continue to shine a light on the drama of World War II and so together they produced the first miniseries Band of Brothers, focusing on the war in Europe. This series was first televised on HBO starting in September of 2001 just days before 9/11 under the Saturn opposite Pluto that was then coming into an exact alignment. It is striking that they would make this next miniseries The Pacific, under the very next Saturn-Pluto alignment, this time the square of 2008-2011. The miniseries was first aired on HBO in March of 2010 with Saturn tightly square Pluto in the sky. Thus both of the major producers of the two series are born with tight Saturn-Pluto hard aspects and they release the two series under subsequent Saturn-Pluto alignments. It is remarkable how these things are orchestrated, and it never ceases to amaze me.
It is worth noting that prior to Band of Brothers perhaps the most celebrated television miniseries to focus on World War II was called The Winds of War, and that series was first televised in February of 1983 under a tight Saturn-Pluto Conjunction. 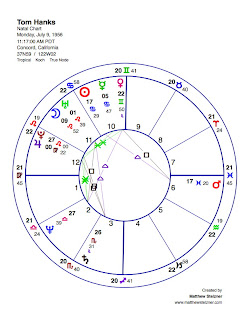 I think it is also important to note that both Spielberg and Hanks also have Jupiter-Pluto hard aspects (Hanks has the conjunction, and Spielberg the square). And their projects all powerfully have the stamp of that archetype as well. It can be the archetype of “Moral-Power” (Jupiter has to do with higher moral principles, and Pluto brings the deep power), and all three of Hanks and Spielberg’s WWII projects could be summarized as moral power being confronted with the the human potential for shadow/evil: in some cases succumbing to the shadow, and in other cases triumphing over it. It is also important to stress that the positive Saturn-Pluto potentials are also on display in these works. Saturn-Pluto at its best has something to do with extreme potentials for strength, fortitude and courage in the face of overwhelming ordeals. It can be the archetype of sisyphean torment, but it is also precisely the strength and endurance necessary to meet the challenge.