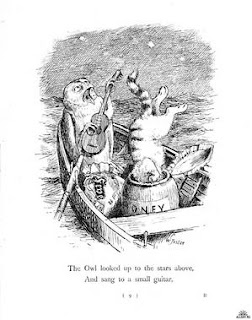 Today I found a blog post written by Roger Ebert on the anniversary of Edward Lear’s death, and it peaked my archetypal interest about this man. I wasn’t that familiar with Lear’s work, but as I read more I saw that he is most famous for writing the children’s poem The Owl and the Pussycat, which I remember loving as a young boy, and that he popularized the limerick form of poetry in the 1800s. He delighted in made-up words, puns and word- play, and became known for his absurdist sense of humor. His first collection of limericks was called A Book of Nonsense.

All of this started to set off archetypal alarm bells for me. These are all classic symptoms of the Mercury-Uranus archetype. And when I looked up Lear’s chart I was pleased to find that he was born with Mercury in a tight opposition to his natal Uranus (and also configured with his Sun, which fits his really shining with the energy and being famous for it). 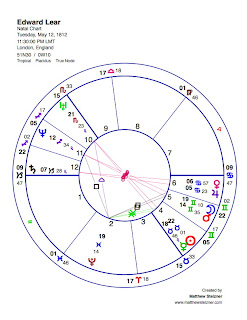 Mercury of course relates to language, words, and communication generally, and Uranus is the principle of invention, playfulness, the unexpected, the trickster. When people are born with Mercury and Uranus in major aspects you often get people who, like Lear, have a gift for language, a quick wit, a capacity for inventing new words. Rick Tarnas gives many examples of people born with Mercury-Uranus aspects in his book Prometheus the Awakener: Oscar Wilde, James Hillman, e.e.cummings, and John Updike, amongst many others, all famous for their inventive use of language.

I particularly like the case of Anthony Burgess (born with Mercury conjunct Uranus), who wrote A Clockwork Orange. Burgess invented an entire slang language for that book, called Nadsat, with words and phrases like “droog,” “gulliver,” and “the old in-out.” Another great example is radio broadcaster Howard Stern (born with a tight Mercury-Uranus opposition) who is famous for his quick-wit and trickster-rebel use of language.

There was a Young Lady whose bonnet,
Came untied when the birds sate upon it;
But she said: ‘I don’t care!
All the birds in the air
Are welcome to sit on my bonnet!’
My experience as an archetypal astrologer was that I first had to learn a basic foundational understanding of each individual combination (Moon-Pluto, Mars-Neptune, Sun-Uranus, etc.), and I needed to have another astrologer who had already developed a sophisticated archetypal eye (for me this was Rick Tarnas) describe the astro-logic for each archetypal tendency (like with this case how Mercury-Uranus often correlates with word play and inventive use of language). But most importantly I needed to be shown many examples of famous individuals born with each combination in order to bring that archetype to life.

There was an Old Person whose habits,
Induced him to feed upon rabbits;
When he’d eaten eighteen,
He turned perfectly green,
Upon which he relinquished those habits.

The astro-logic is important, but once I was able to connect a particular archetype to a real-life example (whether to a famous person, or to someone I knew personally, or to my own lived experience of a transit or natal aspect) then the archetype began to become an embodied form of knowledge. With each new example I experience a form of “archetypal triangulation” where I can look at the archetype from multiple angles and vivify a deeper awareness. With each new embodied encounter with an astrological synchronicity my archetypal eye grows wider and I am able to see and recognize a particular archetype with greater clarity.

There was an Old Lady whose folly,
Induced her to sit on a holly;
Whereon by a thorn,
Her dress being torn,
She quickly became melancholy.

This example of Edward Lear now goes into my personal databank of experience with the Mercury-Uranus archetype, and every time I encounter that combination in the future I will be able to drawn upon a richer understanding. I will be able to remember the playful energy of The Owl and the Pussycat and the archetype will be alive in my consciousness.

Edward Lear’s birth data comes from Rodden’s Astrodatabank and is rated B data (the time comes from Lear’s own personal communication).
The three quoted poems, and the images with them are Lear’s, and are from his A Book of Nonsense, 1862.